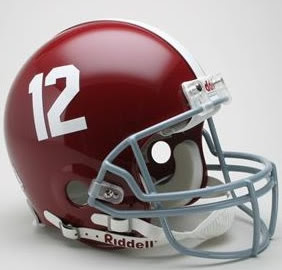 square off one more time this evening for all of the marbles in the BCS National Championship (aka SEC invitational).  While we are at it I will also devote some time to how these teams and their leaders exhibit some of the best qualities of leadership, especially in issues they have dealt with this year.  Before I head into the serious stuff, I have to make my prediction.  As an Auburn parent it is virtually impossible for me to root for the Tide, but I suspect they just might come out on top tonight.  I hope I am wrong, but Nick Saban is a quality coach and Alabama is a quality program, usually.

Let’s get back to the core issues now that the football stuff is out of the way.  Leaders have to deal with multiple issues in any given season and both Les Miles     and Nick Saban    have had their share of adversity this year with their teams, especially Mr. Miles.  Let’s run through a few episodes to help put a context to the discussion.

Leaders have to deal with adversity and loss.  There are several examples of adversity and loss with both teams this year.  Alabama lost their first game to LSU back in November and their reaction to that will be shown tonight in the way they play, but we have already seen much of this in the games the Tide has played since that disappointment.  After losing to LSU the Tide they handled the rest of their schedule quite handily, especially the annual rivalry with Auburn, their instate rival.  LSU had their share of loss and adversity this year, but it was of a different nature.  In October the Tigers had to suspend several of their players due to the usage of an unnamed substance and this suspension included one of their leaders, Tyrann Mathieu, the “Honey Badger”.      The team played one of their most inspired games in the absence of their teammates, dismantling the Auburn Tigers in Baton Rouge that day.  Adversity can be a great teacher for many teams, whether on the gridiron or in the office.  I cannot tell you how often I hear people lament how they cannot afford to discipline their key contributors, but my response is that ignoring those who are playing outside the rules is more harmful than dealing with them.  Just think what kind of message it would have sent to the rest of the LSU team if Coach Miles had not disciplined those individuals for their inappropriate conduct.  Good players respond to discipline and good employees, the ones you want to keep and develop, will do the same in the workplace.

Leaders must respond to challenge and both of these teams have done so this year.  LSU had taken on many quality opponents including Oregon and West Virginia (the ones who plastered Clemson) as well as Alabama.  All three of those games were either in the opponents home or at a neutral site.  LSU has responded to the challenge in every instance and that is the mark of a good, if not great, leader.  Alabama has done much of the same with wins over Arkansas and Auburn at Jordan Hare.  Great leaders will not Always get the desired outcome the first time, but they will strive to learn from their mistakes and perform more effectively in the next opportunity.

So there you have it.  LSU and Alabama will square off on national (international) television this evening and the lessons of their leadership are there for all to see.  Good leaders have many qualities and two that we have show for these two teams, adversity and challenge, are good examples for you and your team in the workplace today.

Line up your team, run your plays and take time to review your progress.  If you know the right moves, especially those that exhibit leadership, you will win many more than you lose.