So it’s Friday-what does that really mean?

Today is Friday January 20, 2012.  That will come as no surprise to those of you reading this on this side of the international date line.  There is a deeper meaning to this post. 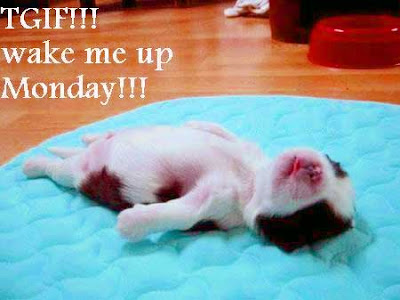 Friday used to be a connotation for many reasons.  For past generations there were acronyms like TGIF, Thank God/goodness its Friday and sayings that denoted the end of a work week and the beginning of a time of leisure or relaxation.  The five day work week used to be a staple in many countries, still is in some, but for more and more of us this is just not  the case anymore.  Let’s take a look at what a standard work week looks like for the world in our new reality:

Here are some statistics from the US DOL in 2006:

Many employees are working longer hours by skipping or shortening their lunch breaks. The National Restaurant Association reported (in “What’s for Lunch? A Survey of Full-Time Employees,” 2002) that 40.6% of the surveyed workers reported they did not leave the office for a lunch break. Forty-five percent reported they had less time for lunch than they ever had. A frequently expressed motivation for staying on the job was a fear of being downsized.
Read more: The American Workplace – How Much Time Do Americans Spend At Work? – Hours, Occupations, Labor, and January – StateUniversity.com http://jobs.stateuniversity.com/pages/17/American-Workplace-HOW-MUCH-TIME-DO-AMERICANS-SPEND-AT-WORK.html#ixzz1k1eDSvqC

Gallup produced the following information during the same time frame:

CNNMoney in their June 6, 2011 article talks more about how much you SHOULD be working in order to be effective, but to not reach exhaustion.  The article offers the following:

In an uncertain job market, fortunate people with steady paying gigs often think twice before shutting down for the day. But is there any benefit to responding to those additional emails or hanging around the office for that extra hour? Is there a weekly hour sweet spot?

It’s a tricky question. One hour per week is too little to do a job well, and 168 — the total number of hours in a week — isn’t right either. Such a sleep-deprived person would be non-functional (not to mention smelly from a lack of showering).

The answer must be somewhere in the middle; a point of diminishing returns where previous hours boost productivity by a large margin, and additional work hours wouldn’t help much. But what amount of hours could that be?

In a competitive economy where people still value their family and leisure time, figuring out the answer could give businesses a strategic advantage, so it’s no surprise that plenty of people have conflicting opinions on the matter.

My personal observations are that people are working more hours per day and more days per week than ever before.  The unstable economy has only added to this by pushing people to do “whatever it takes” in order to keep their current roles at a time when many of their colleagues are outside in the unemployment lines or are working in roles that vastly underutilize their skills and experience.

What will be the long term implications of this trend?  I think there are many:

Many firms think too much about how they can better attract new employees and don’t think much at all about how they can satisfy and more deeply engage those who are already on staff.  I predict that turnover in firms who are unaware of this will rise at a much higher rate than they have ever seen before.

The world of work is changing rapidly, but many firms are like the proverbial “frog in the pot of water” where the frog doesn’t realize just how hot the water has become before things go too far.

What is your firm doing to balance the work needs and the personal needs of those “survivors” who have stayed on board during this desperate time?

If you cannot think of much, the water is getting hotter and the results will become apparent in 2012 and 2013.

Do you agree?  Are employers taking their employees too much for granted?