What is the “True Value” in Failure?

We live in a world where winners are glorified and losers are vilified.  I can cite examples on end and many of you will recognize the names.  Those of us with a little snow on the roof (grey hair) have seen enough time go by where famous losers have become winners and we have also seen famous winners “head south.”  Seeing that there is value in winning, I ask you the question, “Is there any value in losing or experiencing failure?”  Let’s look at some examples and then draw a few conclusions.

My first example that failure has value is in the fact that Harvard Business Review has a column/blog that is focused on redefining failure.  Read this post from Seth Godin and see if it doesn’t help you redefine what failure is:

We think we know what failure looks like. Products don’t get purchased. Reorganizations make things worse. Shipments aren’t delivered. Speeches don’t get applauded. Things explode. These are the emergencies and disasters that we have nightmares about.

We think that failure is the opposite of success, and we optimize our organizations to avoid it. We install layers and layers of management to eliminate risk and prevent catastrophes. One surefire way we’ve found to avoid failing is to narrowly define what failure is—in other words, to treat almost everything that happens as a non-failure. If the outcome of our efforts isn’t a failure, there’s no need to panic, is there? Failure creates urgency. Failure gets you fired. Failure cannot stand; it demands a response. But the status quo is simply embraced and, incredibly, protected.

Failure is something we encounter every day in our lives and our ability to recognize, assess and overcome failure is what makes some of us successful and many of us less than we can be.  Life is full of failure and you better get used to it or you will not learn anything of much value.

I recently read a book entitled “The Endurance“, a book written about Ernest Shackleton‘s adventure to Antarctica in 1914 that began an almost two-year saga that ended up with Shackleton and all of his crew being rescued.  Not one man was lost, but many did incur great hardships.  Reading through the story one can cite failure after failure, many of which provided great learning opportunities for all involved and tremendous insight for those who then followed after them.  The fact that no one lost their life is amazing when you consider the hardships they endured.  Don’t take my word for this; read the book.  It is amazing!
Abraham Lincoln could be the poster child for failure.  Lincoln lost 6 of his first 7 elections before he was elected President of the United States.  A lesser person would have given up much earlier, but Lincoln stuck with his vision and ultimately reached his final goal.  Lincoln also make me think of another word that goes hand in hand with successful people who fail.  That word is persistence.  Only the most persistent will understand how to utilize their failures and harness the learning into motivation for future accomplishment.  The ability to do this is a great skill. 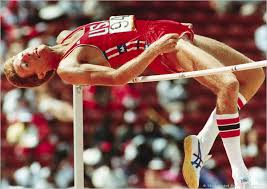 I was sitting in church this morning and one of the most glamorous events in track and field revolves around failure.  This event is the high jump.  The winner of the event is not always the person who jumped the highest, but every jumper eventually reaches his or her point of failure.  There is just no other way to understand what your capacity is until you get to your point of failure.

Think about your life and reflect upon your most recent failure.  What was this failure and what did you learn from it?  If the answer is nothing, you need to go back and look again.  There is always something to be learned.

Effective leaders know how to fail and they also understand how to allow others within their world to failure effectively on a regular basis.  None of us wants someone who repeatedly fails at the same thing.  On the other hand, never give me a person who has never failed.  Those who have not failed have not pushed their limits or their capacity.  Those who have experienced failure are the ones I want by my side, especially when tough times come.

Failure-it just may be the breakfast of champions.  Chew on that for a while.