Working Wounded-Part 3: When is a good time to take one for the team?

I have spent a good period of time talking about the Working Wounded, this in the workplace who are still alive and functioning, but who are working below capacity and who, when presented with the right opportunity, will strongly consider the greener grass just across the fence.  We have talked thus far about what the Working Wounded look like and I have copied this information from my initial post on this group:

There are other terms for the Working Wounded; disengaged, disenchanted, bitter, angry and just plain mad.  The working wounded are all around us in the workplace and you may just be one of them.

In many cases the Working Wounded may see themselves as victims.  These victims can see themselves as passed over, overlooked, forgotten or just plain ignored.  Many of these working wounded may be doing just enough to get by and to miss out on the “corporate guillotine” that has severed so many from their jobs in the economic downturn we are still immersed in, at least in many sectors and in many geographies.

One thought that many of the working wounded need to consider is that an option they might consider would be to allow themselves to be removed from the workforce, to “take one for the team.”  Let me further describe this so you will know what I really mean. 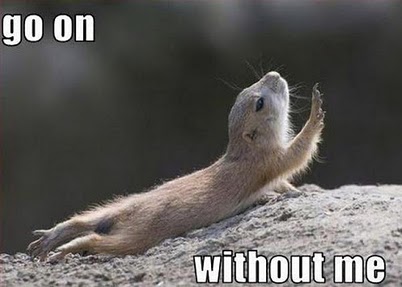 Taking one for the team can be a healthy and productive way to realize that you are not part of the future of your organization, or to also come to grips with the fact that you have reached a ceiling in your present role.  This is a bitter pill for many to swallow, but it can also be a first step on the road to recovery for many when they realize that their best option is not to continue hunkering down in their present role, but to consider what the real world would look like when they left this current position.  Not everyone is ready to take one for the team, but those who do it can in many cases be better off in the long run to separate themselves from the anger and bitterness that continues to fester in the dead end role they were captured in.

If you are part of the working wounded you might consider this option, but before you leap, let’s look at some of the tell-tale signs of when it might be right to take one for the team:

If you are dealing with any one of these, I would take some time to think about how much you like your present role.

If you are seeing yourself agreeing with 2 or more of the items listed above, it might be time to think about taking yourself out of your present role and putting yourself into something that would provide new opportunities for growth and enrichment.

We will talk more in the next post about how to prepare when you get ready to take the leap.  Just remember, you don’t want to be the “frog in the pot” who doesn’t realize that he is cooked until it is too late.

Taking one for the team can be good for yourself and for those you are around.

Have you considered taking one for the team?